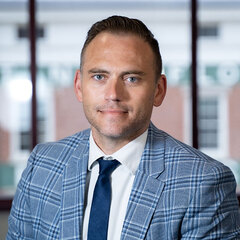 Josh became President & CEO of IARF on April 1, 2018 after nearly fifteen years working to advance the budget and policy priorities of the Association through the Illinois General Assembly and United States Congress.  During his tenure as Vice President of Government Relations & Operations, Legislative Director, and Legislative Liaison, Josh lead IARF efforts to pass several initiatives into law, managed grassroots advocacy campaigns to protect funding for community-based services and supports, and represented IARF on many broad-based coalition efforts.

Josh currently serves on the Board of Directors of the American Network of Community Options and Resources (ANCOR), where he is also Chair of the State Association Executives Committee and Co-Chair of the Government Relations Advisory Committee.

He caught his first fish at age 37. It was a bluegill.

Luis Andrade joined IARF in April of 2019 as the Vice President of Health and Long-Term Care Policy. Most recently, Luis was the Director of Government Relations for the Illinois Health and Hospital Association where he represented over 200 of the state's hospitals and health systems.  Prior to his work with the IHA, Luis was also the lead Human Services research and appropriations analyst for the Office of Speaker. In this role, he conducted hundreds of legislative analyses, dozens of budget summaries during the 2-year budget impasse, and organized logistics for several public hearings pertaining to Medicaid and healthcare, involving several state human services agencies and advocacy groups. Luis holds a master's degree in Public Policy Administration from Northwestern University and a bachelor's degree in Urban/Public Affairs and Political Science from the University of Illinois at Chicago. He is also a global war on terrorism service veteran, having served five years in the United States Navy as a military police officer.

Beth Owens joined IARF in August of 2019 as the Vice President of Intellectual and Developmental Disabilities Policy.  Prior to joining the IARF team Beth was the Crisis and Emergency Manager for an Independent Service Coordination Agency, serving as a support to Metro East provider agencies and a liaison for those agencies with IDHS/DDD.  Beth is a Qualified Intellectual Disabilities Professional (QIDP) with a background that includes working in ICF/DD, CILA, DT and ISC agencies. She has a vested interest in assisting with the development and improvement of services in Illinois.  Additionally, Beth is a 2016 graduate of the inaugural IARFutures class.
Emily Miller
VICE PRESIDENT OF BEHAVIORAL HEALTH POLICY
​Contact: emiller@iarf.org
Emily Miller re-joined IARF in September 2021 as the Vice President of Behavioral Health Policy. Prior to resuming this role, Emily served in multiple policy-related roles for IARF from 2012 to 2018, including Behavioral Health Policy Analyst and VP of BH Policy. Emily began her career in state government as a Legislative Liaison and Legislative Director for DCFS, DHFS, and DPH and served under two governorships. Emily has a strong background in collaboration and communication and looks forward to continuing to strengthen and grow the Association's role in shaping behavioral health policy in Illinois. Maggie joined the IARF team in December of 2014. Prior to IARF, she worked for Midstate Special Education as a paraprofessional with children ages K-12. In her position, Maggie works closely with the President/CEO to accomplish the organizational work of the Association. She works closely with the Board of Directors and Chairs of the IARF Committees to coordinate and inform them of meetings and special events. Primary to her responsibilities is the business of membership recruitment and retention. As members are the lifeblood of IARF, Maggie is central to implementation of our campaign to maintain a strong, engaged membership.

Our staff is always willing to help. Please reach out if you have any questions or concerns.